Skip to content
[SOLVED] Instead of relaying on the search crawler for the #Comments field, I simply added the following line in the Display Template and that works with continous crawling:
_#= ctx.CurrentItem.NumComments =#_
[/SOLVED]
I want to show both number of Likes and Comments in the News webpart, which I have built using Content Search and my own custom Display Template. 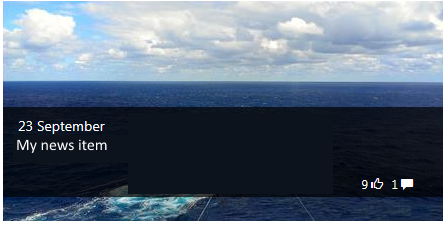 […] It requires a full crawl all the time to update the counter. We also found this issue mentioned here […]

Could you give a bit more information what have you done to achieve this? DId you use CSWP or CQWP? I have used CSWP and managed to get the Number of Likes but not number of comments,As i am very new to SharePoint

I used the CQWP at the end, instead of the CSWP. Please read my full solution here:
http://sharepointbabe.blogspot.se/2015/04/display-comments-and-likes-in-cqwp.html

Thank you for visiting my blog 🙂

I like the way on how you put up your blogs. Wonderful and awesome. Hope to read more post from you in the future. Goodluck. Happy blogging!