So this new look has been rolled out last week in SharePoint online for Office 365 users. At first glance it looks great, I like that “hard-to-find” ribbon is gone and easy access to all buttons.

But then I got a call yesterday from a customer who was asking why their document libraries no longer worked as expected. What had happened was that the “Group by” function no longer worked correctly, as the First level grouping was hidden and the Second level was instead displaying all documents. Which led to big confusion for the users of course.

Grouped views displays documents by their second level, not first!

Is this a BUG or change of standard functionality? Grouped views has been in the product as far as I can remember (I have worked with your products since 2003 and document library features has not changed that much). Why change something so basic that has been in the product for so long, don’t the developers at Office365/SharePoint/MS (who knows) think we are using these functions or why??

I noticed that if you change view from “All documents” (which is the default view in document libraries, untouched!) to the “Tiles”, then the grouping works but its still not smooth, it is very much clicking around and you soon get lost on where you are in the library. It shows first level one and if you click on that level you can see level two but you must click back and forth. It’s just not good enough! It’s messy!

There has always been an option to Group documents in two levels (maximum) and now this is obviously removed in SharePoint online (I have tested back and forth and this is what I found), so you can only have 1 level of grouped documents. And yes it would be acceptable if this now is the case and all documents were grouped and displayed by that First level but NO, they are now grouped and displayed by the Second level so we have to go in to each library and REMOVE that second level so that the first level is showing our documents, WTF!!!: 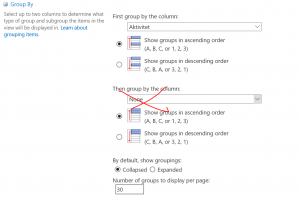 Don’t the developer teams follow their own “best practices” and test these type of scenarios?? I mean, before rolling out a new critical function like this? They don’t think this feature is implemented on intranets and document management systems out there?? Well then they have not seen many real live intranets because I see it a LOT!!

I have always followed the OOB standard and educated people telling them how important it is to follow Microsoft recommendations and use metadata instead of folders, to easily find and filter documents and that search picks up metadata etc. And one thing I have learned from all the years of working very closely to the organizations is that “people want structure“. They can’t handle when you just dump thousands of docs in one library and say “use the columns to filter”. No, they want to organize the documents so it looks like folders, although its metadata. And that magic could happen with the “Group by” function. Yes, you can have one level now in the new “modern libraries” but then the button “Quick Edit” is gone so “win some loose some”. So again. Not acceptable.

And why isn’t such important functions like “Quick Edit” visible on Grouped views? Come on!!! It was the same already in the on-prem 2013 product on grouped views so I guess this is something that is programmatically hard to achieve (?) but should that be OUR problem? As a workaround I have always had to build own “Edit” views so the users can do this fast and easy (fake it til you make it right?). We want to be able to work fast and easy, not click so many times that you forgot what you were doing on the way there… Yes they can select a document and use the i-button and the task pane etc… But what if they want to use the fantastic “QuickEdit” view to update several documents at the same time?

Button for “Open with explorer”

Yes, this function that users love! Is this gone now, really? Wow. I will not miss it but I know who will…

So questions to Microsoft:

Situations like this really makes me question why I am working with this product, because we have to struggle so hard to make users understand how to work properly with SharePoint  and not only use it as a file share, (yes that is very common out there) but to really discover all the great functionality with SharePoint document management. But it’s tiresome when standard functionality changes and all of a sudden you doubt the things you have claimed were good and best practice.

Modern libraries have updated their UI. It’s offer similar experience like One Drive.

Thank you for starting this conversation! I agree with you, ability to group by 2 columns is critical and is being used by many organizations to simulate “folders”. Hopefully this will be tuned back on sometime soon.