Skip to content
10 April update: That last version 5.1.7322.8 did not help solving this issue with InfoPath. It seems like the problem with templates has to do with forms that uses Data Connections. There is a new version 6 out that I have not installed yet, will come back with an update after that.

5 March: Awesome news! I got a mail from the vendor that the newest version will have a hotfix that will correct this issue. It will be released in a few weeks. Look forward to that, and will of course update this blog post if things go well.

This post is about enabling replication between servers using a replication software and the problems related to that. It works well for exchanging content, but when it comes to InfoPath there are some real problems. This is not yet solved so there will probably be a part 2 of this post.

I have published a lot of web forms (InfoPath forms services) on the intranet and when they start replicating they run into the problems listed below. Same thing happens to a list that you have customized, the customised form is lost so it looks like a regular list again. The replication vendor has no solution so far.

The error will run in circles because if you make an update on one server, that will replicate to the others and the errors will just keep on coming back. Here are the errors and why they happen.

Advanced settings are not replicated
The first time you set up replication on an InfoPath form and try to open a form on the site, it will load in InfoPath and not in the browser. That is because the “Advanced settings” of the library are not replicated. You need to go in to the library and set the “Open in browser” again and then you also have to open your form template and republish it: 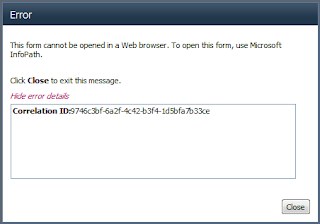 Data connections are lost
When you have done this change, the form gives you a new message. Now the data connections can’t be accessed, since they have lost the connection to the secondary data sources: 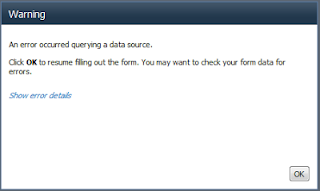 So you have to go in and add those back again in the IP form template: 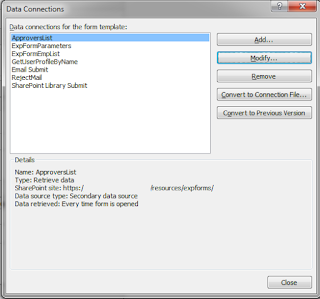 By this time, your form has start replicating and now all other target servers has gotten those same errors. So this will just keep on going around in circles.

So what I did was to stop replicating the “Content types” and it works HALFWAY. Because then another problem came up…

The xsn version of the form template changes
Of course when you have done a change locally on a template it will get a new version number. So now all versions of this template is not in sync. And the result of that is that the users get the below error message. If they click “OK” the form loads but still annoying: 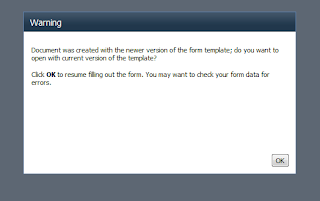 I have the setting on my IP forms to “Automatically upgrade form version”, which is the default setting. If the user clicks on OK the form loads, but I don’t want that message! I compared versions of the form and on the source server we have version 1.0.0.1701 and on the target server we have 1.0.0.1709 and that is of course because I had to open the form and add the data sources and all the other steps I wrote about before, that were lost while replicating: 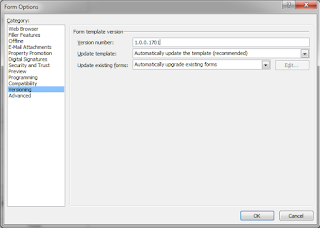 So I changed the version to be the same on both servers. And that helped. So now that message was gone. But this is only a temporary help, not a SOLUTION! Once a form is updated again, the problems will all come back. So I will test publishing a new template that has “Do nothing” instead of “Automatic update version” to see if that can help.

My hope now is that the vendor will deliver a solution for this soon, otherwise this is turning into a big EPIC FAIL.